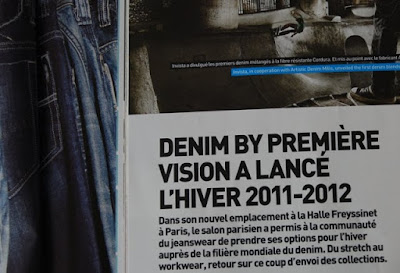 Yesterday evening, Wednesday 2 June 2010, Adriano Goldschmied, founder of AG and president of the jury, announced the winner of the first Future Denim Designers Award: Gabriella Massey.
The presentation took place in Paris at Denim by Première Vision, to an audience of denim connoisseurs made up of the show’s exhibitors, visitors and press.
Following an initial selection which was carried out in January among the final-year students of London’s Central Saint Martins College menswear degree course, there were 6 competitors: Yunjoo Cho, Gabriella Massey, Philip Patterson, Nicolas Smith, Adam Thomson, Dominic Tsai, each of whom was invited earlier in the day to defend his or her creations in front of the jury which comprised international personalities from the blue planet.
Gabriella Massey's two piece winning outfitcomprised a black shirt and ultra-bleached jeans. The initial simplicity of the ensemble belies the sophisticated "exploded" detailing Massey worked to achieve.
The prize, symbolized by a diploma and a trophy, includes an internship at Radrags, an Italian company offering services to the whole jeanswear chain founded by Umberto Brocchetto, the Italian denim expert who assisted the laureates’ first steps in the denim universe and oversaw the production of their outfits.
Created by Denim by Première Vision, the Future Denim Designers Award - which focuses on creativity, innovation and a knowledge of the denim industry - is aimed at giving emerging designers comprehensive insight into the world of jeanswear.
Posted by Denimoholic